I currently hold my first money-paying, time-sheet-entering, boss-reporting job. Ever. (Unless we count the phone campaign I did for the boarding school I went to. Seeing as I was paid with a bottle of Champagne and 50 pounds, I think we can’t count that)

Anyways, I feel like I’ve learned a lot in these past 6 months. Here’s just a quick list.

Also I’m going on my first work trip to Ethiopia in a week and a half! Look out for a blogpost about that for sure.

We, Monique and Ariel, met in line for a flight going from Honolulu, Hawaii to Guam.

…who goes to Guam?

Well, the United States Navy does. We were flying to Guam to board a Naval hospital ship, the USNS Mercy.

So tonight’s post is going to be a bit of a photo chronicle of the mission for us enginerds.

We hung out in that ward a lot.

Indonesia: water testing at a clinic and a police station.

Philippines: team huddle! We did the most construction in the Philippines.

Some med student friends from UCSD!

Damage control in the US Navy was giving a fire hose demonstration to local firefighters in the Philippines.

The filters we were installing all over the place (there will be a post about that can o’ worms).

WOMEN engineers and JAG! And, an Australian.

Having a party at sea, another ship pulled up beside us and gave us some gas and strawberrys. Big THANK YOU to the USNS Richard E. Byrd for that one.

Seawall design, construction, and retrofit in tsunami inundation zone of the Philippines.

We’re all going to change the world together!!

Set-up demo of the slow sand filters (sigh, Ariel will tell you why later).

It all began on a long van ride in the Philippines after finishing an elementary school construction project at a barangay outside of Calbayog. We were both volunteering for the summer on a humanitarian mission as water quality engineers. We started thinking of all the various projects that have failed within the field and what the causes were. We discussed why certain international development projects are unsuccessful and became aggravated because most of the reasons had very simple solutions. We kept saying, “I would never let that happen.” With this passion we daydreamed about all the projects we wanted to participate in and how we could make a positive impact. And, the idea of Tubig, meaning water in Tagalog, was born.

We are both very busy women, Monique is a graduate student in two Master’s programs with two jobs at her university in Hawaii and Ariel just landed a project management position in D.C. for a non-profit. So how could we both keep motivated and make a contribution with what little time we have left? THIS IS IT!

This blog is going to show both of our personalities: Ariel is technical and loves all the latest engineering innovations; Monique combines culture and community into engineering with an artsy twist. The objective of this blog is to try to shrink all of the amazing projects, inspirations, lessons, and goals people have and are doing all around the world either from an environmental engineering firm’s perspective in Portland to the humanitarian worker making clay filters in Africa. It’s a one stop blog of what is goin’ on in the world of WATER! 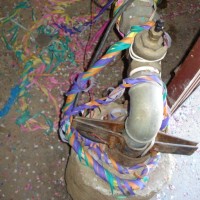